PARIS, Aug 25 (Reuter) – Africans seized in a raid on a French church won legal battles on Sunday when police scrapped expulsion orders against 45 of them and a judge released more of the dwindling group of detainees, lawyers said.

Four of the Africans were deported on Saturday night on a plane that flew to Mali, Senegal and Zaire as Prime Minister Alain Juppe sought to balance a crackdown on illegal immigration with a promise of “humanity”.

It was unclear how many of the 210 Africans originally seized by riot police on Friday in Paris’ Saint-Bernard church, including 10 on a 50-day hunger strike when police swooped, were still in detention.

The church raid triggered protests against the centre-right government and clashes between stone-throwing protesters and riot police in Paris on Friday night and again around a military airbase when the first Africans were deported.

All 68 children and almost all 54 women were freed on Friday and Saturday along with some of the 98 men.

A Paris civil court released 39 of the Africans from detention on Sunday, ruling police had violated legal technicalities, notably because arrest documents were not signed by a sufficiently senior official.

But the release from detention did not mean the 39 would get residence permits, nor that they were cleared of possible expulsion. Out of 53 cases presented, the court agreed to extend detention for 14 other people.

“What’s worrying and bothersome is that there are still 14 held and we have the greatest concern for them,” the Africans’ lawyer Francois Breteau told France Info radio.

Lawyers have argued from the start that the use of riot police, using batons and tear gas, was illegal in a church peacefully occupied by the immigrants.

Spokesmen for the group said the 10 hunger strikers, who are under medical supervision in detention, were keeping up their fast, protesting against expulsion. One man had started refusing to take liquids.

Balancing the crackdown, the Interior Ministry said on Saturday that more than 40 of those seized in the church would be granted residence permits in coming days “due to family or health situations”.

It was not clear if the 45 scrapped expulsion orders corresponded to these cases. The Africans had demanded residence rights for all.

They said Juppe, meeting President Jacques Chirac in the president’s Riviera retreat for a weekend of talks, wanted to make the laws more “efficient” and more “humane”.

Similar words were used by the government before Friday’s raid. Saturday’s plane was the 23rd charter plane since the government took office in May 1995.

The 1993 immigration laws, named after former interior minister Charles Pasqua, are a tangle partly because some immigrants, such as parents of children born in France since 1993, can now neither be expelled nor obtain residence permits. 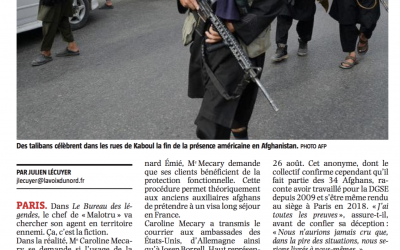